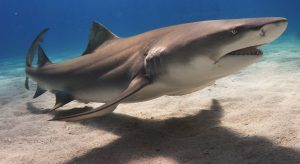 The Lemon Shark gets its name from its yellow-brown coloring. Social creatures, Lemon Sharks typically live in groups in warm, shallow coastal waters, mangrove forests, and coral reefs. The Lemon Shark isn’t fast, but is powerful and can grow up to 10 feet long. They eat mainly boney fish and crustaceans on the seafloor and have the incredible ability to sense prey buried under the sand!

Dive with Lemon Sharks in Bimini and at Tiger Beach. 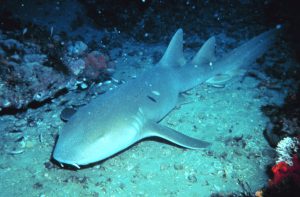 Nurse Sharks spend most of their time resting on the ocean floor as they do not need to swim to stay alive like many species of shark. They get their name because they make a sucking noise when hunting and have mouths strong enough to crush a lobster or suck a conch out of its shell. Adults grow to be 7 to 9 feet long and are known to be gentle, non-aggressive sharks.

See Nurse Sharks on our Bahamas shark dives in Bimini and at Tiger Beach. 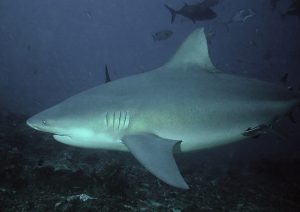 With a blunt rounded nose and stout body, it’s no wonder where Bull Sharks got their name. They typically inhabit warm coastal waters but are known for the incredible ability to live in freshwater. Bull Sharks have been known to swim thousands of miles up rivers! 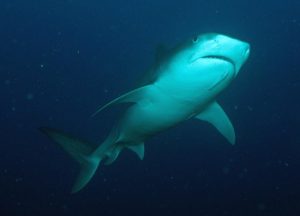 Incredible in size, the Tiger Shark can grow to be at least 18 feet long and weigh almost a ton. As the name suggests, the Tiger Shark has stripes on its side that fade slightly as they grow. They are at home in coastal water and the open ocean and are known for eating almost anything they can get their jaws around.

Tiger Sharks are spotted in Bimini, but one of the best places to cage dive with Tiger Sharks is off Grand Bahama Island at a spot nicknamed “Tiger Beach”. 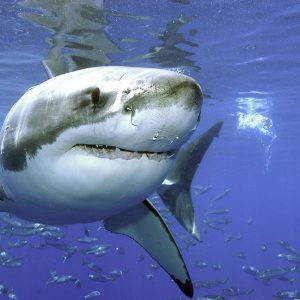 White Sharks are the largest predatory sharks and are known for their ability to breach when hunting, especially off the coast of South Africa. They like colder water and don’t usually venture into tropical areas. Growing to around 23 feet long on average, this shark is more commonly known as the Great White Shark.

Dive with great white sharks at San Francisco’s Farallon Islands, at Isla Guadalupe and near Cape Town and Gansbaai in South Africa. 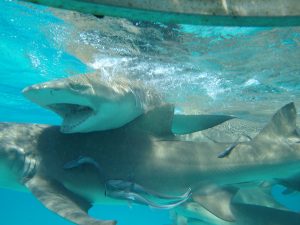 Caribbean Reef Sharks inhabit their namesake, only being found Florida, Bermuda, the northern Gulf of Mexico, Yucatan, Cuba, Jamaica, Bahamas, Mexico, Puerto Rico, Colombia, Venezuela, and Brazil and are the most abundant shark in the Bahamas. They grow up to 10 feet long and are known for their unusual and unexplained habit of “sleeping” motionless at the sea floor or in an ocean cave.

See Caribbean Reef Sharks when you book a cage dive to Bimini or Tiger Beach. 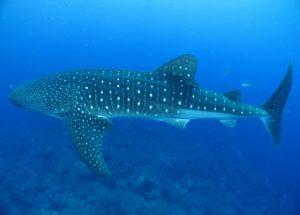 Whale Sharks are called such because they are filter feeders and hold the title for largest fish in the ocean. Each Whale Shark’s pattern of spots is unique and individual sharks can be identified by their pattern. These gentle giants are considered harmless to humans. 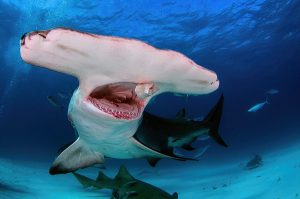 The Great Hammerhead Shark is the largest of the hammerheads and averages over 500 pounds in weight and up to 20 feet in length. The distinct shape of their head allows them to have a larger viewing range and they can detect animals under the sand with their “sixth sense.” The Great Hammerhead is on the IUCN endangered species list, making it a treat for cage divers and scuba divers.

Great Hammerhead Dive season in Bimini is December to April.

Most sharks have 5 gills, but not the Six Gill Shark. This shark is small, when compared to other sharks, typically not surpassing 6 feet in length. Because these sharks typically inhabit deep water, not much is known about them. They hang out a couple thousand feet under sea level on the ocean floor and will only swim towards the surface during the nighttime hours.

To see a Six Gill Shark, consider booking a shark dive in the Sub Idabel, in Roatan.

Why We Use Shark Cages

Incredible Adventures strongly believes in the use of shark cages when diving with big sharks and uses protective shark cages on all our great white and tiger shark adventures. Shark cages help to protect both divers and sharks from harm. Despite what some believe, sharks aren’t killing machines out to dine on the first human who swims by. They don’t patrol the ocean like “Jaws” just waiting for a chance to eat a surfer or swimmer. But, sharks can and do, very rarely and very accidentally, mistake a human for an elephant seal or big fish. We don’t believe in taking unnecessary chances with our customers’ lives.

Cages also serve another great purpose. They help to make it possible for non-divers to experience the underwater world of sharks. By using cages and hookah systems, which supply air from the boat or dock, both divers and non-divers can experience a shark encounter.